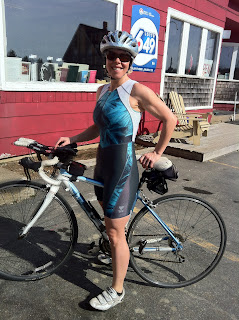 WOW, weird weather or what?  Do I ever love these hot days in March, temperatures above 20 degrees. Crazy…and lucky as hell!  I could not have picked a better time to train for my first ironman-distance triathlon. I’m blessed by Mother Nature and grateful for it.  It’s not every day you can wear shorts and go sleeveless in March on the bike.

It’s been a while since I’ve written about my training. I have been one busy girl, like any one else getting ready for such a race.  Most of the time, I’m having great days and The Plan is still keeping me entertained. Hard to believe but I now am into my first week of the competitive training.  Base training is all done!

I have to much to write about but will spread it out in a few blogs as it’s too much to write/read all in one. Let’s start with an update on my health, as it is a common question we Canadians ask each other.

First of all, I have a team of specialists (chiropractor, osteopath & occupational therapist with an exercise physiology background) that are looking after my body for me (all at affordable rates).  I’m lucky to have this team in small Lunenburg Country, NS.  My chiropractor, Dr. Laurie Flavin, has been looking after me since 2008 and is amazing. She operates out of Lunenburg.  The osteopath is Breadon Girones, works out of Laurie’s office in Lunenburg, is the newest addition to my team. Jason Lomond, occupational therapist and owner of Peak Performance Therapy in Bridgewater, I have known for about two years and he’s simply incredible.  He is helping me more with my training, identifying my weak areas and prescribing exercises to make me stronger, so I can prevent new injuries from happening and continue to train smart.

I hate to admit it but I have 3 issues I’m dealing with currently. The good news is they are all minor and not a result of my training, which is different.  Anyway, here’s the scoop…

1) Baker’s Cyst, a build up of joint fluid that forms behind the knee.  See the lump in the pic? I thought it was pretty big but apparently it is small compared to what the doctors have seen before.  What is a Baker’s Cyst?  Check it out. I got mine from a  meniscal tear, tripped over a log while hiking on Cross Island.  Apparently Dr. Mark Fletcher, Sports Medicine Specialist from Medicine in Motion, Dartmouth, NS, said it’s nothing to worry about as it causes me no pain.  As I said, it’s small and they have seen ones 4x bigger.  It may or may not go away on it’s own but as long as it’s not bothering me, I just leave it alone.  So then I’ll leave it alone, and mention it no more.

2) I have trauma deep in my left hip that causes me hamstring and glute discomfort after long runs.  The osteopath is treating me for this.  The issue stems from about 15-17 years ago, not sure of the specific incident but I do remember when it started to pain me.  I never had it properly treated at the time. For the past 3-4 years I have been trying to get it fixed but no treatment has been successful to-date. Now I’m trying an osteopath for the first time.  We’ll see how it goes…

3) Heel fat pad contusion (http://www.sportsmd.com/Articles/id/46.aspx):  this is the most bothersome of all my injuries right now. It doesn’t hurt when I run but afterwards it sure does. I had it in both heels and did the damage from either cardio kick-boxing (taught a 10 week class) or dancing in my bare feet (or a combo of both).  I should have let it heal at the time it occurred…if I had been smart.  I never experienced anything like this before so I didn’t know, never gave it much thought.  Anyway, the right foot completely healed, even while running. The left foot is taking forever. So after much thought I decided to give up land running while I’m still 3 months away from race day until the heel is healed. I’m doing all my running in the water and extra biking.  This week I’ll do interval stair climbing on real stairs (going to try it, see if it doesn’t bother the foot).  So between water running, interval stair climbing and biking, I should be able to keep some of my running fitness.  It’s not as good as running…as you need to run lots to get better at running, but it’s better than doing nothing.

Here is a story that was comforting to me:  http://m2rev.com/articles/m2_training_concepts/water.html

And speaking of biking and water running to help with running.  I did some research to see if there is transfer from bike to run, water run to run.  What was interesting to find that most benefits actual transfer from running to biking instead, the reverse of what I thought.  And yes, water running, if done right, is a smart thing I am doing in place of land running while recovering.  I figure in another week, I’ll be back to pounding the pavement…starting with soft touches. I really need to learn how to hover over the ground, that would just solve all my problems. HA!

Here are some articles to better explain what I’m talking about for the running-biking transfer. Would love to hear your comments.

Despite the above 3 issues, I’m not upset.  Neither of them are causing me any great grief, I’m popping no pain pills, losing no sleep, and although I’m not land running, I’m still training the muscles and movement as best as I can.  I’m in good spirits and feeling pretty positive that my the time race day comes, I’m going to be in tip-top condition.

Now…to pull away from the computer and get out on the bike…it’s 28 degrees today…March 22.  WOW!

The new year brings excitement in setting your health and fitness goals.  We start off on our wellness journey with vigor and determination.  After about a month…

Have you ever used a race day simulation (sim) training strategy to prepare yourself for race day? Here is a story about a strategy I…

I like the hot weather we had last week and the warm days of the week before.  Yes I do! Wow, what a boost of…

We use cookies on our website to give you the most relevant experience by remembering your preferences and repeat visits. By clicking “Accept”, you consent to the use of ALL the cookies.
.
Cookie SettingsAccept
Manage consent

This website uses cookies to improve your experience while you navigate through the website. Out of these, the cookies that are categorized as necessary are stored on your browser as they are essential for the working of basic functionalities of the website. We also use third-party cookies that help us analyze and understand how you use this website. These cookies will be stored in your browser only with your consent. You also have the option to opt-out of these cookies. But opting out of some of these cookies may affect your browsing experience.
Necessary Always Enabled
Necessary cookies are absolutely essential for the website to function properly. These cookies ensure basic functionalities and security features of the website, anonymously.
Functional
Functional cookies help to perform certain functionalities like sharing the content of the website on social media platforms, collect feedbacks, and other third-party features.
Performance
Performance cookies are used to understand and analyze the key performance indexes of the website which helps in delivering a better user experience for the visitors.
Analytics
Analytical cookies are used to understand how visitors interact with the website. These cookies help provide information on metrics the number of visitors, bounce rate, traffic source, etc.
Advertisement
Advertisement cookies are used to provide visitors with relevant ads and marketing campaigns. These cookies track visitors across websites and collect information to provide customized ads.
Others
Other uncategorized cookies are those that are being analyzed and have not been classified into a category as yet.
SAVE & ACCEPT
Powered by

Please confirm you want to block this member.

You will no longer be able to:

Please note: This action will also remove this member from your connections and send a report to the site admin. Please allow a few minutes for this process to complete.

You have already reported this
Clear Clear All